Whether it’s your type on paper or not, Love Island is indisputably huge. Since its first (non-celebrity) iteration in 2015, it has snowballed in popularity to become the behemoth it is today. The most commercialised show on British television, Love Island is a show about coupling up, turning heads and getting dumped. Millions of British and Irish people will tune in six nights a week for an hour or more, with the ferocity and enthusiasm of any sports fan. Crucially for sponsors, this means there’s plenty of air time to get their products front and centre.

This year, Love Island earned its broadcasting channel ITV £12m in advertising fees before the first episode even aired. Superdrug sponsored the show in 2017 and reported 200,000 more website visits after each episode and a 900% increase in Superdrug brand search terms. In 2018, Missguided boasted a 40% sales increase every night the show was on. And even beyond the official sponsors, many brands are jumping on the proverbial bandwagon to tap into the hype.

Interested in leveraging some of the hype for your business’ social strategy, but not sure how? Jo Booth is the Owner and Managing Director of Social Media Makes Sense, the only UK agency specialising solely in TV and film. Her agency has led major campaigns for a wide variety of programmes, including: BBC One’s Poldark, ITV’s Endeavour, BBC One’s Line of Duty, BBC Two’s Hospital and Sky’s Portrait Artist of the Year. We caught up with her to discuss five learnings we’ve seen from the brands who have chosen to couple up with Love Island.

1. Understand if the audience is your type on paper

Understanding the audience is a universal key to successful campaigns. Especially with interacting with pop culture, it’s important to have a good grasp of who you’re talking to. You need to consider not only how they will relate to your business, but also how they will reflect on your business.

“If you try and make a square peg fit a round hole, it just won’t work,” says Jo. “If your brand values and those of your audience aren’t compatible with the message you’re portraying, not only will it not land well, it can actually be very damaging. If you don’t deliver a conversation your audience can relate to, they will find a brand that can. No audience, no customers, no business.”

This holds particularly true with Love Island. The most watched television show in the UK, Love Island boasts alluringly attractive viewing figures, but dig into some data and this huge audience becomes a bit more specific. 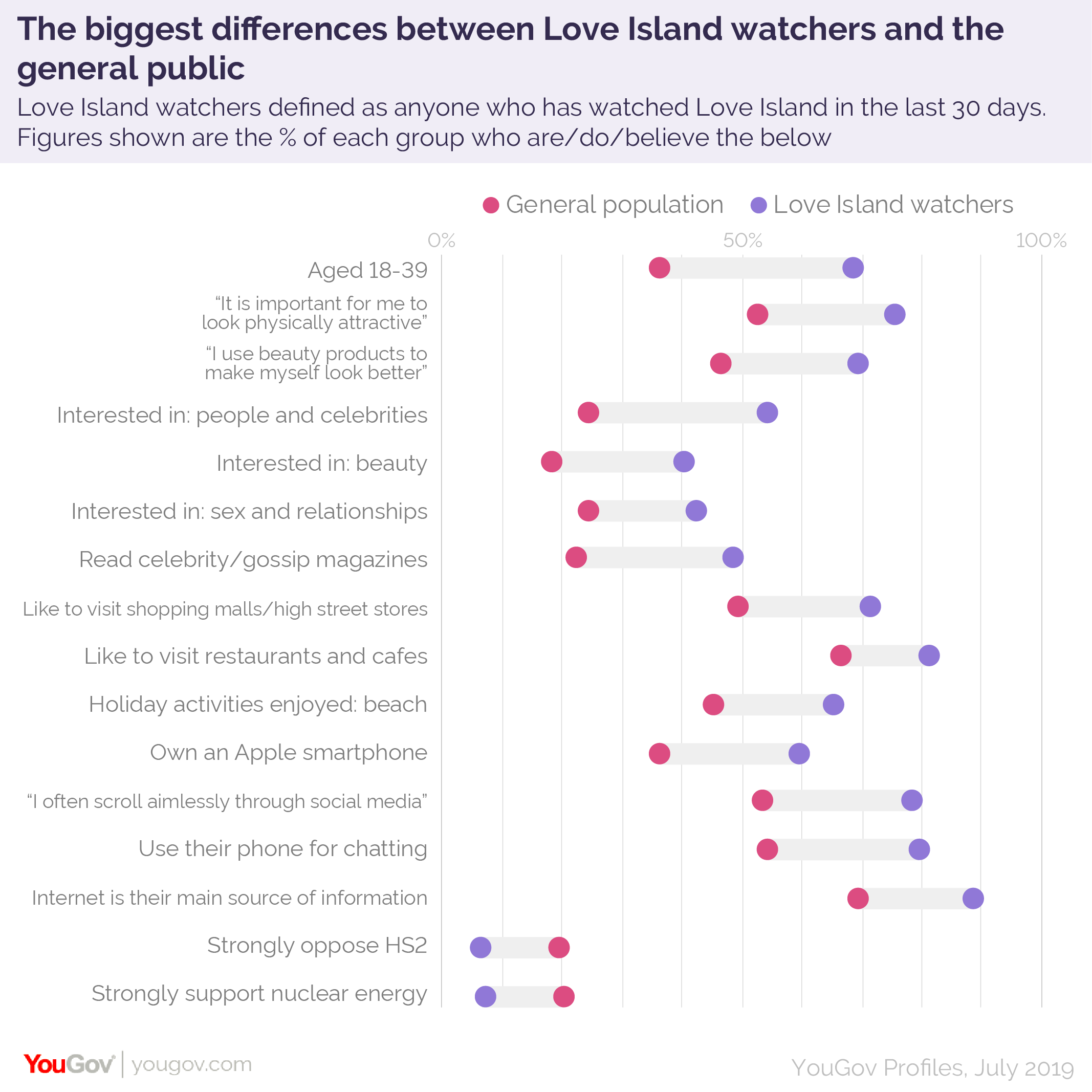 With this information, it’s clear to see why typically “young” retail, fashion and beauty brands like Look Fantastic, I Saw It First, Missguided and Superdrug have all been official partners of the show.

2. Pull them for a chat: Joining the conversation online

Love Island is absolutely synonymous with social media (indeed, many of its contestants are famously sourced from it) and with that, represents a new way of interacting with audiences.

Social media is where trends are created, shared and evolved; therefore to not have a social media strategy when engaging with pop culture is naive. Indeed, social is where brands can take part in the Love Island hype without the luxury (or expense) of an official partnership or sponsorship.

Jo agrees that brands without a sponsorship deal shouldn’t shy away from joining the conversation. “Let’s face it, not many businesses can afford to sponsor Love Island. But it’s the perfect fit for your brand then why not join the conversation? Be relatable, be interesting, be interested. People don’t talk about ‘safe’ brands, they talk about ‘bold’ brands.”

Missguided, which sponsored the show in 2018, has used social media to remain part of the Love Island conversation (despite no longer being an official partner). Not being formally linked to the show has allowed them to get involved in conversations and sound more like a fan than a sponsor. Of course this natural tone of voice within the online conversation is all while still peppering their feed with products, sales and offers.

This freer and dedicated social strategy paid off dividends in 2019, when the brand was able to still claim a significant portion of the conversation share, with 157,000 mentions and a reach of 1.92 million.

Missguided is by no means the only non-official business joining in the conversation–but it is a good example of how a comprehensive and opportunistic social strategy can be rewarding, without the huge price tag of sponsorship.

3. Crack on with social commerce

Another key consideration is how audiences consume content. BARB (Broadcaster’s Audience Research Board) has reported that Love Island is consistently top of the list of most watched TV shows viewed on devices other than televisions. This is another key attraction about this particular audience—they are likely already on their devices, which makes marketing to them just that bit easier.

Official fashion partner, I Saw It First maximised this behaviour. Officially styling the female contestants as they went on dates, and knowing viewers were already likely viewing the show on a device, I Saw It First made it extremely easy for consumers to buy. Not only were the contestants essentially modelling the clothes for them, I Saw It First also created a shop section in the official Love Island app. When viewers used the app to vote for who stayed or got evicted from the island, they could instantly purchase outfits the contestants had worn. This resulted in a 67% rise in sales, 60% rise in web traffic, 250,00 new customers on site, 254% rise in Instagram followers and 61% rise in Twitter followers.

The more cynical Love Island viewers might question whether the contestants are on the show to find love or to find contracts. It’s undeniable that many of the contestants do go on to promote all sorts of brands on their Instagram feeds. But how effective are influencers for your business?

After a summer of watching the contestants on television, audiences feel connected to them. Dare we say it–they’re relatable. In a world where authenticity is scarce, working with an influencer can act as a shortcut to finding it with your audience.

Still not convinced? Research has shown that, on average for every £1 spent on a talent-led campaign, brands are getting back £17.21. This means that if you’re trying to connect with your audience in a fresh, authentic way, influencer marketing is hard to beat.

Find out more about influencer marketing

5. Make listening a bit of you

Associating your brand with anything you don’t control will always come with risks. If you’re using pop culture references, trends or influencers in your business strategy, it’s worth getting familiar with social listening. The volume of engagement might be appealing, but it’s important to know what topics to seize, which conversations to join and if you’re jumping into a positive theme or not. Yes, there’s a real chance that you could go viral, but will it be for the right reasons?

“Love Island is ALL about conversation, gossip and opinion,” Jo enthuses. “It’s the epitome of social media. If your business has the same core values as the show, you need to be present where consumers are talking about it and be part of the dialogue. But equally as important is recognising that social isn’t right for every show, every time.”

What’s hot or not with Love Island can change daily. Love Island might be the most commercialised television show, but it is also the most controversial; so it’s important to have a firm grasp on the swings and roundabouts of public opinion. Likewise, if you’re considering working with an influencer, it’s important you know what conversations are happening with them, but also about them.

With social listening you can not only dip into what people are talking about, but also understand how they are talking about these topics with sentiment analysis. All pop culture hinges on trends, but particularly with Love Island, it’s important that you stay relevant and on the right side of controversy.

Love Island is a great example of a perennial hype that drives exponentially more conversation year on year. While it can seem tempting to jump in feet first and associate your business with such voluminous interest, it’s clear that the most successful businesses have taken a moment to consider their strategies.

Pop culture trends can be a great way to connect with audiences, but it’s a lot more than just memes and gifs. To derive tangible business ROI, having a robust social strategy and understanding of your audience is key. Not every trend is going to be a good match for your business; but if you find one that works, it’s definitely worth coupling up.

Interested in learning more about how social listening could help your business? There are nearly infinite ways to use listening, from influencing product design and finding your competitors’ pain points to mitigating an emerging crisis and rousing new raving fans. Check out our free guide for 40 unique ways you can use social listening to make an impact on your business.