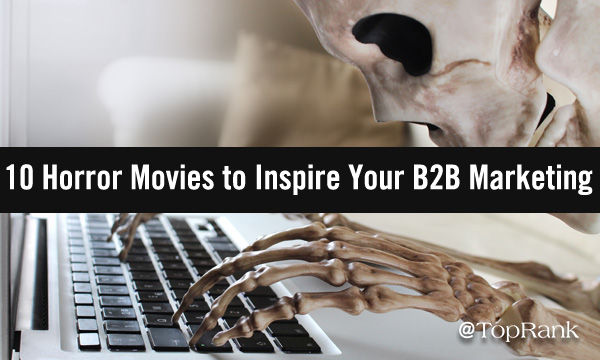 We’ve been saying for years that B2B marketing should be emotional, exciting, entertaining and engaging — in short, creative. Great marketing not only wins those industry awards, it gets better results.

We’ve proven as much with the work our agency puts out. But it’s nice to get some third-party vindication. LinkedIn’s B2B Institute just published a report called “Cashing in on Creativity.” They analyzed over 1500 B2B ads and found two huge takeaways:

In other words, we don’t have to measure creativity in moonbeams and rainbows. We can measure in dollars and cents.

To help kickstart your creativity, I’m combining two of my obsessions: Great marketing and great horror movies. Here are 10 of my favorites and how they can inspire your next awesome campaign.

#1: Anna and the Apocalypse – Go multimedia and think WAY outside the box

I’ve only seen one. And I show it to anyone who will watch.  Anna and the Apocalypse has a shape you might recognize, but gives the old tropes a fresh infusion of color, music and heart. There’s nothing else like it on earth.

How can your marketing use multimedia assets in unexpected ways? How can you get more interactive, more experiential, more emotional?

Justin Benson and Aaron Moorehead, the team behind The Endless, Synchronic, Resolution, are experts at making wildly bizarre movies that are firmly grounded in human emotion. The Endless is a movie about time loops, doomsday cults, and elder gods… but it’s really about choosing to move on or getting stuck in the past. It’s about the allure of sameness and repetition, but how you can only grow if you reject them and embrace the new.

For marketers, as we embrace our creativity, we have to keep empathy and humanity front and center. Your weirdest flights of fancy can work as long as they have that firm foundation. Without it, you may be able to attract attention, but you won’t be able to hold it. The underlying purpose is what makes your work resonate and stick with your audience.

#3: Freddy Vs. Jason – Bring audiences together with influencers

For years, the Nightmare on Elm Street (Freddy) and Friday the 13th (Jason) franchises were the Apple vs. PC of horror fandom. Either you were into Freddy’s wild dreamscapes and smart quips (and were correct), or you dug Jason’s mute, masked ultra-violence.

Then along came Freddy Vs. Jason, which put the two villains head-to-head with a fresh group of teenagers to menace. Fans of both franchises found plenty to like, and many were inspired to check out the other camps’ filmography.

Influencer marketing can bring audiences together in the same way. Your brand advocates can find new folks to follow, and people who already follow your influencers can get a taste of what your brand’s all about. Check out our latest influencer marketing report to see how it works.

In 1968, George Romero created the modern zombie movie with Night of the Living Dead. For over 30 years, virtually all zombies followed his template: They were shambling hordes, terrifying because of their numbers, slow but unstoppable.

Then came 28 Days Later. In this film, the zombies are FAST. Faster than healthy folks. They’re not dimwitted shambling undead — they’re sprinting after you, ravenous with hunger. Writer Alex Garland took one of the most universal truths about zombies and inverted it, creating an entire new subgenre.

This year’s Creative B2B Cannes Lions featured examples of inverting conventional wisdom. B2B shouldn’t be emotional? Here’s an ad to make you sniffle and call your mom. Hyper-personalization is too creepy for B2B? How about we write songs calling out our target customers BY NAME?

When David Gordon Green signed on for the latest Halloween sequel (the 9th in the series, not counting two reboot movies), he was faced with a daunting mess of convoluted continuity. The franchise started as a simple slasher movie, but everything from possessed masks to witches’ curses had been grafted onto the mythology over the years.

What did Green do? He made a direct sequel to the first movie, ignoring installments 2-8. The result was a lean, fresh take on a familiar property that made it seem new again.

Marketers should follow Michael Meyers on this one (but not on the whole ‘stabbing people’ thing, please). Don’t cling to what you’ve always done, just because you’ve always done it. Don’t let tradition or sunk costs tie you to junk that isn’t working. Keep what you need and ditch what you don’t.

[bctt tweet=”“Don’t cling to what you’ve always done, just because you’ve always done it. Don’t let tradition or sunk costs tie you to junk that isn’t working. Keep what you need and ditch what you don’t.” — Joshua Nite @NiteWrites” username=”toprank”]

Stop me if you’ve heard this age-old story: A young woman discovers that when she drunkenly staggered through a park in New Hampshire, a 50-foot tall monster emerged in South Korea and mimicked all of her actions, laying waste to a coastal village. And it proceeds from there about as you’d expect.

What’s striking about Colossal is that every part of it makes perfect sense, even though it doesn’t make any special effort to orient the audience or explain everything away. There are no mountains of exposition. The filmmaker trusts that you’ll understand and accept his flights of fancy in the service of a truly human-centered story.

Do you trust your audience to connect the dots? More importantly, do you trust them to share your values and vision? Recent research found that marketers regularly underestimate their audiences’ capacity for empathy and desire to help others. It may be your target audience needs less hand-holding than you’re giving them.

#7: Cabin in the Woods – Challenge your biggest fans

Cabin in the Woods is half horror movie, half commentary on horror movies and fans of the genre. It gleefully breaks down tired tropes like the Final Girl, the teens punished for being promiscuous, and Japanese horror’s obsession with creepy kids.

At the same time, though, it challenges fans to examine what they like about the genre. It examines why horror is appealing, what we’re watching for, and even how the fandom can turn toxic.

Creative marketers are starting to challenge their fans, too. Gillette braved a firestorm of controversy with its We Believe ad. Nike asked football fans to examine their own prejudices by partnering with Colin Kaepernick. There’s always risk in taking a bold stance and asking your fans to get introspective — but it’s a risk worth taking.

What do you need to make the minimum viable horror movie? If you’re the team behind The Boat, all you need is a single actor and one location to keep your audience on the edge of their seats. The entirety of the movie takes place on a small sailboat, with the boat’s captain fighting for survival against the elements (and a potentially supernatural menace). It’s minimalist filmmaking at its best.

As marketers are being asked to do more with less, take The Boat as inspiration to see how much you can streamline your efforts without affecting your results. What are the truly essential elements for capturing and keeping attention?

#9: Psycho – Change it up to keep the audience engaged

The remarkable thing about Psycho is that the first 45 minutes is a straightforward noir thriller — it’s about a woman who steals money from her employer and goes on the lam. The first kill is at the 46-minute mark, marking a genre switch from heist to horror. It’s an amazing rug-pull that filmmakers can’t stop paying homage to, from Hereditary to From Dusk ‘Til Dawn.

If you’re starting to feel bored and boring with your creative, it’s time to change it up! Give that next eBook a fun theme that lends itself to vibrant visuals. Add eye-catching infographics to your next social-first campaign. If your audience has gotten used to (and tired of) your brand voice, you may need to get a little Psycho.

The sequel to Joe Dante’s classic monster movie is a remarkable reversal in tone. The heartfelt moments and terrifying creatures from the first movie are played for laughs. Even though the original actors return, playing the same characters, the entire movie is a parody of the first one.

Who would do this to Joe Dante’s legacy?

Joe Dante, of course! He saw that as fun as it was to scare the pants off his audience in the first installment, he could have even more fun lovingly making fun of it. The result is a sequel like no other, weird and wonderful and an absolute blast.

If you can find ways to poke fun at your brand without undermining it, you can show a whole new side to your audience. Self-deprecating humor can be endearing and unexpected, breathing life into the most staid of brands.

There’s nothing scary about being creative

B2B brands used to be afraid of letting their creative flags fly. Now, they should be afraid of keeping things buttoned down and boring. Bold and creative work is not just for winning industry awards anymore; it’s the best way to reach an audience that is just as desperate for entertainment as they are in B2C.